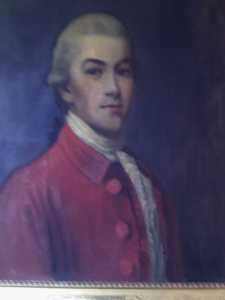 My great-great-great-great grandfather was a Colonel in the Revolutionary Army, at one time Mayor of the City of Charleston, Chief Justice of the Supreme Court of South Carolina, and father of the two abolitionist sisters – Sarah and Angelina.

He formulated the legal structure of South Carolina. So it must have come as quite a shock that two of his daughters had such an antipathy towards slavery, upon which the State of South Carolina relied so heavily. Nevertheless, despite the fact that women were supposed to be given an education befitting their station as wives, subject to their husbands, and plantation mistresses, Sarah in particular sought ways to undermine this – in her case, by discussing with her brother Thomas what he was taught. Her father once stated that if she had been a son, she would have been one of the best lawyers in south Carolina – perhaps a somewhat grudging admission of her intellectual abilities.

Towards the end of his tenure as Supreme Court Judge, John Faucheraud Grimke was unjustly impeached but exonerated of all charges. There was pressure from below for a new generation to “take up the reins”. John never recovered from this experience and contracted a life-threatening disease, the nature of which no-one was able to diagnose. He was advised to go up north to Long Branch on the New Jersey seaboard to find refreshment from the climate. It was a mark of his respect for his daughter, that he took Sarah with him. He died in Long Branch, despite all Sarah’s ministrations and was buried in the Episcopal Church cemetery in Shrewsbury – away from his native Charleston, probably according to his wishes. So far, the location of his grave has not been ascertained.